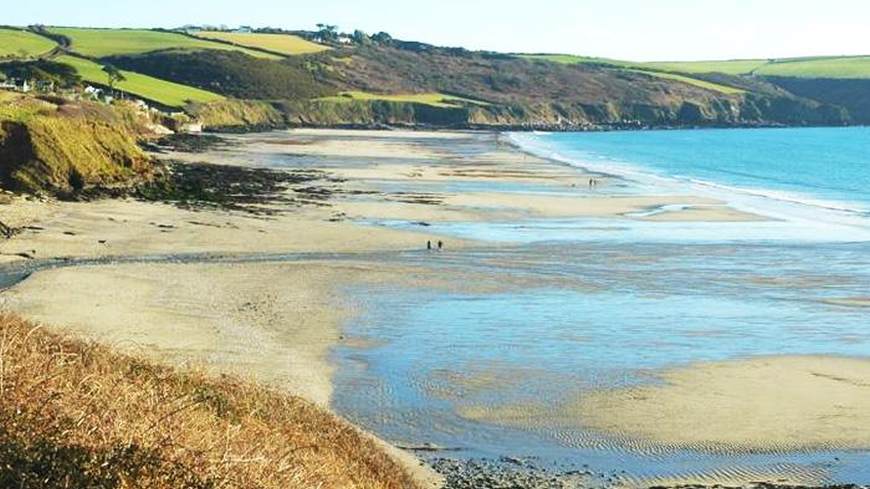 A fine south facing sandy beach that is over 1km long and forms a major part of Gerrans Bay that has the distinctive Nare Head on its easterly flank. They are often regarded as two separate beaches but in reality they are one with a small flat rocky area in between. Carne Beach is known as the easterly end and has a different access point to the longer Pendower Beach which runs westwards.

TR2 5PF - for Carne. On the A3078 road from Truro to St.Mawes, 2.5kms south of Tregony turn left to Veryan. Go through the village on the road signposted to Carne and Pendower. After 0.5km turn left and follow the road to Carne Beach with its National Trust Car Park (Capacity over 180 cars) on the right; there is roadside parking for about 17 cars on the left just above the slipway access to the beach. Pedestrian access next to the road is very straightforward and is suitable both for pushchairs and wheelchairs. TR2 5PE - for Pendower. Take the directions for the village of Veryan as for Carne (above) but instead of turning left just past the cricket ground continue for 1.5kms to the end of the road and the car park (capacity 100+ cars). It is then a short walk (100m) through sand dunes to the beach. An alternative way to Pendower is to continue along the A3078 south of Tregony through Ruan High Lanesand then take the second turning on the left which is signposted to Pendower. After 500m the road reaches a dead end at the beach where there is roadside parking on the right for about 18 cars. There is a slipway access on to the beach from the road which is ideal for pushchairs and wheelchairs.

There is a strip of sand above high water mark at the access point to Carne but as the tide goes out a wonderful flat sandy beach is exposed. At certain times of the year the beach has patches of shingle, especially in winter. A stream crosses the beach at the easterly end of Carne Beach which is known as Gidleywell. Pendower has a larger area of sand above high water mark and by the two access points there is a flat area of sand dunes which merges into the beach. A stream crosses the beach which is verypopular with children in summer although its course tends to change from year to year. Like Carne, Pendower becomes an extensive flat sandy beach at low water. There are rocky areas below the low cliffs between the beaches and beyond the low rocky area at the westerly end of Pendower Beach there is a southern extension of the sand although it can have areas of stone and shingle. This part of the beach has a more south easterly aspect and can be the most sheltered part of the whole beach. By the slipway at Carne there is a hard surfaced area with seats which is popular with the elderly and less mobile as they can enjoy the beach without having to go on to the sand. In summer it is best not to sit too close to the slipways because of the use by various craft.

There are no rescue/safety points at either end of the beach and there are no lifeguard services.
The whole beach is relatively safe for swimming when the conditions are favourable although it is always better to enter the water on a rising tide.

Despite being a south coast beach, there are times when there can be reasonable surf although this tends to occur more in autumn and winter and used by young locals learning the skills rather than the more experienced who favour the heavy swell and surf of the north coast. Bodyboarding is quite popular as is Kite surfing when windy. The easy access also enables dinghy sailing and kayaking and in summer these activities can dominate the beach.

There is good snorkelling at either end of the beach but especially around Pibyah Rocks at the far western end and below the cliffs towards Nare Head.