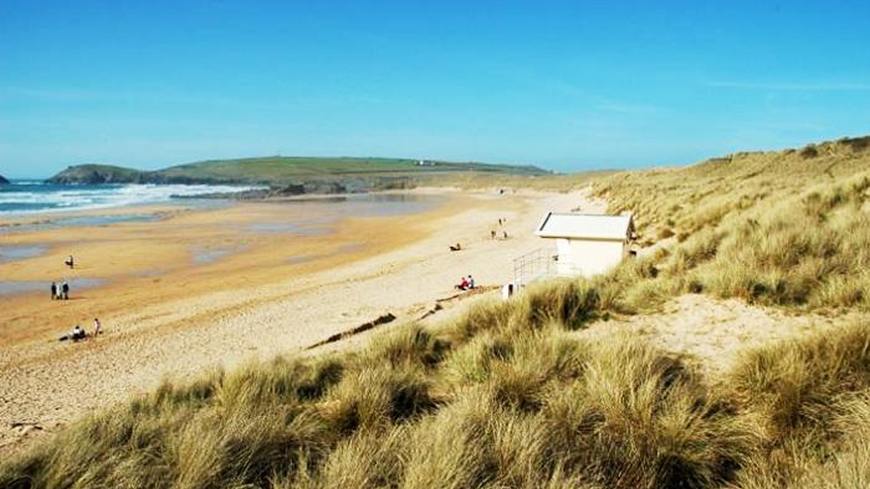 A splendid sweeping westerly facing beach that is backed by an impressive sand dune system and next to Trevose Golf Course. At low water it joins up with Boobys Bay but is separated at higher tides by a line of rocks. It is set in one of the most open coastal landscapes in Cornwall so can be exposed from many angles but this also gives it a wonderful ‘open’ feeling.

It is framed against the easily identifiable Trevose Head to the north with its lighthouse. It is a popular beach in summer and in an area with many caravan and camping sites and holiday complexes. The popular Treyarnon Bay is very close being less than 500m to the south and midway between the two beaches is a small beach called Chair Cove which has a sandy spot at low water. It is named after a 6th Century Cornish Saint, St. Constantine.

PL28 8JJ - On the B3276 coast road from Padstow to Newquay is St.Merryn (4.5kms from Padstow). 350m west of the cross roads at St.Merryn is a signposted turning to Constantine Bay; after 1.3kms bear left and then first right and after a further 500m there is a car park on the right (capacity 300 cars) which tends to be only open during the main summer months. A further 250m on at the end of the road is a small car park (30 cars) but this can often be full at weekends out of season. There is little or no roadside parking because of parking restrictions during summer and the lack of available places to park without causing an obstruction. An alternative that is favoured by many is to park at Treyarnon Bay.

The car park next to the beach involves a very short walk along the vehicular access track and then a sandy ramp on to the beach itself; alternatively to get to the far side of the beach there is a path that runs through the sand dunes from the car park. From the main car park it is a 250m walk down the road. If parking at Treyarnon Bay it is an easy flat 500m walk along the Coast Path past Chair Cove which has some great views along the coast.

At high water there is a 700m strip of sand bounded by sand dunes although in winter this can be very small and sometimes quite stony. As the tide goes out a wonderful golden sandy beach appears with flat rocky ledges on the southerly end which continue around Treyarnon Point. The sand is usually fairly coarse. The rocky area bounding Boobys Bay to the north includes Constantine Island. Finding shelter on windy days can be a problem but in other respects it is a fine family beach. A stream crosses the beach.

There is safety equipment above the beach by the access point but nothing at the far end. RNLI Lifeguards are on duty at Easter Week and then from the end of April until the end of September. The lookout is prominent in the middle of the beach on the edge of the dunes.
Constantine Bay is notoriously dangerous because of strong rip currents so swimming is only possible in the designated bathing areas when the lifeguards are on duty and indicate it is safe to enter the water. Very occasionally when it is calm and the tide is high, swimming can be undertaken but then only with care.

This beach is regarded by some as one of the best surfing beaches in Cornwall with a classic beach break that is hollow, fast and often powerful. Facing due west it gets the full Atlantic swell with a swell size that starts working well at less than 1m and holds up to over 2m. It is not a good choice for beginners as there are a range of hazards from serious rips to shallow rocky reefs and a steep high tide shelf. The reef on the southerly part of the beach is popular with experienced surfers as the waves can get very big and intimidating. There is a surfing school that operates from the beach.

It is not a snorkelling beach but there are numerous rock pools in the rocky reefs at both ends of the beach when the tide is low. With crabs and small fish easy to find it is popular with children. It is well worth exploring the reefs around to Treyarnon Point.

Dogs are allowed on the beach all year. There are toilets (including disabled) by the small car parking area above the beach.

The nearest cafe and beach shop is 550m away at Treyarnon Bay which are open during the summer but there is also a cafe and shops in the village centre of Constantine about 750m back along the road from the beach with restaurants, shops, cafes and a pub at St.Merryn on the approach to Constantine Sea water quality is very good but the stream is unknown. The beach is cleaned by Cornwall Council (which partly owns it). There is a footpath to an historic well and remains of an early medieval church on the golf course which was once sand dunes.