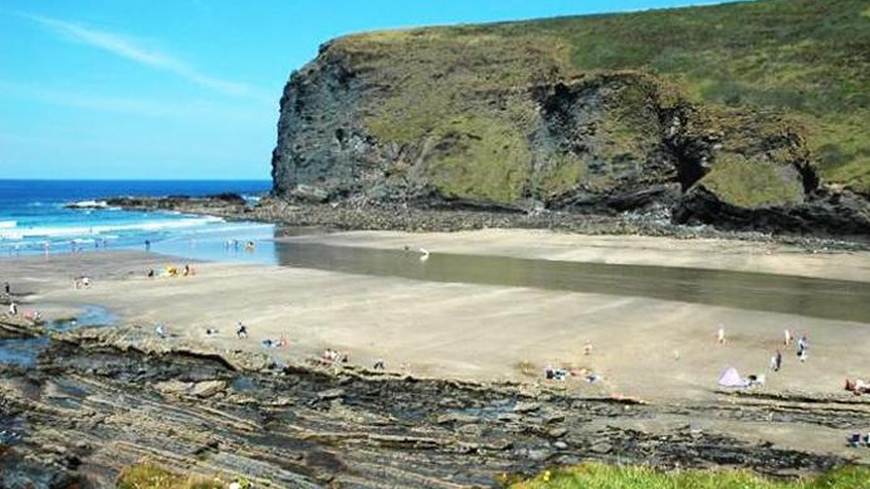 A couple of contrasting beaches that are separated by rocks beneath Bray Point. Crackington Haven is an attractive, well known, popular and very accessible inlet beach beneath formidable cliffs but at the end of a valley. Tremoutha Haven is far less accessible, mostly stony and only visited by a few and then only at low water. Until the mid 19th Century Crackington Haven was a small port similar to many others along the North Cornwall coastline exporting slate and farming produce. In Cornish it is known as ‘Porthkrag’.

The beaches are well known for their geological features of heavily folded Carboniferous sandstones and grey slates known as the ‘Crackington Formation’. There are the remains of an E boat at the westerly end of Tremoutha Haven with many pieces of the remains clearly visible at low water. Crackington Beach is owned by the local Parish Council and a private landowner.

EX23 0JG - From the crossroads at Wainhouse Corner on the A39, approximately midway between Bude and Camelford, take the road signposted to Crackington Haven which is 4kms. Alternatively from Tintagel and Boscastle take the B3263 and turn left at Tresparrett Cross and through Higher Crackington. There are two car parks; the surfaced car park (capacity 87 cars) is at the valley bottom on the opposite side of the road from Crackington Beach. The other is some 300m from the beach on the northerly road into the village on the left hand side (capacity 100+cars).

There is a direct access on to the Crackington Beach from the road down ramps at either side of the beach which are suitable for pushchairs and wheel chairs. Access to Tremoutha Beach involves walking down Crackington Beach and scrambling over the rocks on the westerly side of the beach around Bray Point. This is not difficult but can only be undertaken two hours (or thereabouts) either side of low water. There is evidence of a path down the cliff to Tremoutha from the Coast Path on the westerly side of Crackington about 300m from the Tennis Courts; however it is severely overgrown with Blackthorn, so much so the author could not verify whether it is a safe or practical option. Locals are known to clamber up the cliff from the easterly side of Tremoutha above the sandy section of beach.

Crackington Haven has an area of stones and shingle above high water but as the tides recedes a gently sloping sandy beach is exposed with a striking area of ‘ribbed’ rocky reefs on the southerly side. A stream crosses the beach but its course tends to keep close to the rocks. The 130m high cliffs of Pencannow Point which rise abruptly on the northerly side of the beach and Cambeak on the westerly side of Tremoutha provide a noticeable degree of shelter to the beach with its westerly aspect. Tremoutha usually has three small areas of grey sand/shingle above high water mark and in contrast to Crackington is a wide bay with rocks areas and boulders at low tide although sand often appears beyond the rocks at low spring tides. It is more exposed than Crackington and care needs to be taken not to get cut off by fast incoming tides.

There is safety equipment at Crackington but nothing at Tremoutha. RNLI Lifeguards are on duty from early July until The beginning of September and operate a designated bathing area.

At low water there are notorious rip currents so swimming is dangerous; bathing should only be undertaken in the lifeguard patrolled area. Swimming in quiet conditions and on a rising high tide at Crackington can be considered but with care.

Crackington is a fairly popular surfing beach as the waves are usually smaller than further up the coast so can be ideal for beginners when there is a large swell elsewhere. The degree of shelter also means that it is usually cleaner than nearby locations. It is best at mid to low water but care needs to be taken with the rocky reefs; it is well known that Crackington can hold big swells although can ‘close out’ at low tide.

The swell and surf usually make snorkelling difficult, if not impossible although during an occasional very quiet period the rocky areas around Bray Point can be interesting. At low water the numerous rock pools are a feature of both beaches. Dogs are not permitted at Crackington from Easter Day until the end of September. There are toilets located on the southerly side of Crackington Beach. There are cafes, beach shop and pub close to the main beach. The ramps on to the beach can be used to launch small craft.]

Water quality has been consistently good in recent years although the quality of the stream is not known. Crackington Haven is a fine family beach that never seems to get overcrowded.