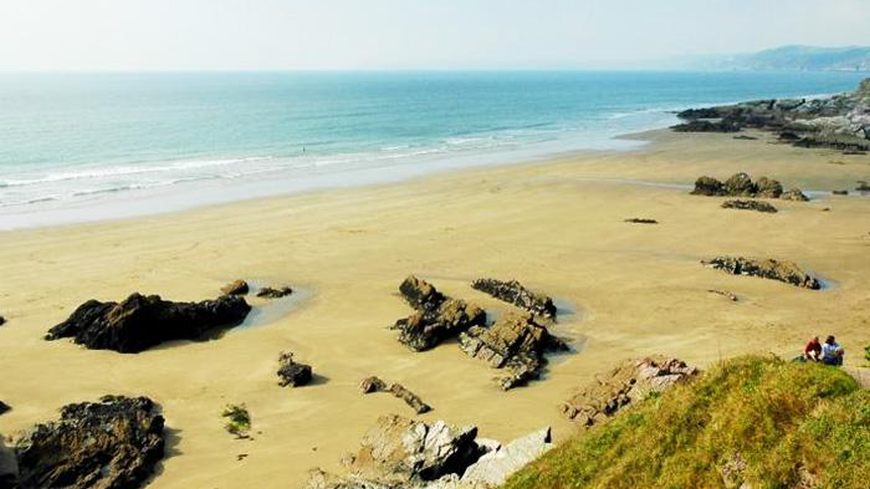 This impressive sandy beach is a part of Whitsand Bay that stretches from Polhawn Cove to the south east, westwards to Finnygook Beach at Portwrinkle, a striking distance of 7.2kms. Freathy Beach merges into Tregonhawke Beach on one side and is seperated from Sharrow Beach by Sharrow Point except at low water. Access to the beach is down one of two steep cliff paths past a mixture of chalets that were originally erected long before there were any planning controls but are now an integral part of the character.

PL10 1JT - From the A374 Trerulefoot to Torpoint road, turn off on to the B3247 and continue to the viewing lay-by next to Tregantle Fort; just beyond is a right turn to the coast road; continue for 1.8kms and on the left at Sharrow there is a car park (capacity a140+cars) which also serves Freathy and involves a walk further along the road to a public footpath on the right which winds down to the beach.

Alternatively, there is a certain amount of roadside parking along the coast road at Freathy or a seasonal car park (capacity 300+cars) further on – PL101JS – which also serves Tregonhawke; this entails walking back into Freathy and on the left one of the two paths (which are fairly steep) as shown on the map depending which part of the beach you want to go to.

The main area of beach is between the main access (with the lifeguard lookout) and Sharrow Point. It is more like a cove, has an area of sand above high water and is very sheltered; as a result it can be quite a popular spot. Towards Tregonhawke there are another three cove-like areas which have little dry sand and are seperated from the main beach at half tide; an access path to these are shown on the map.

There is safety equipment and a RNLI Lifeguard Service from the early July to the beginning of September. It is advisable not to swim along this stretch of beach except when the Lifeguards are on duty due to strong rip currents. There is often good surfing conditions. It is not a snorkelling beach although a favourite spot for divers out in the Bay; there are a few rock and sand pools. It is a good place for beach fishing.

Dogs are allowed all year. There are no toilets, the nearest being at Millbrook (2.5kms). See Tregonhawke for other facilities.

Water quality is not known but believed to be good. It is a fine beach but the lack of facilities and fairly tricky access might be a problem for some.