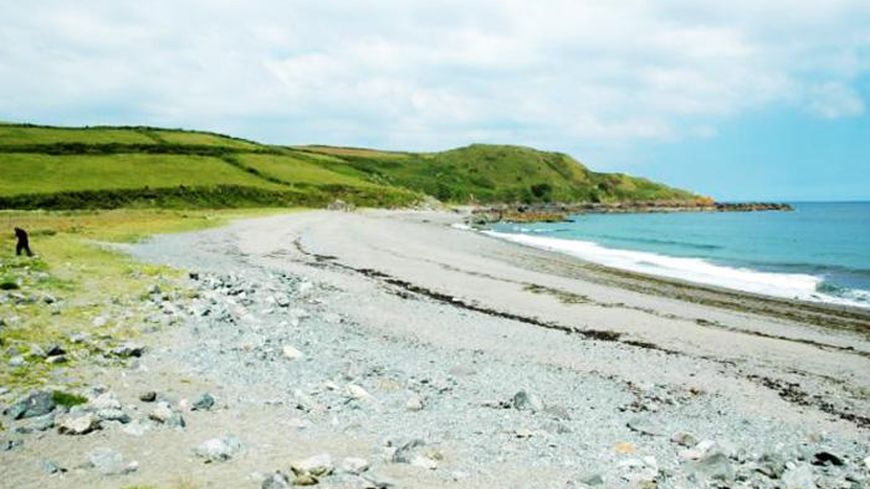 With views out to the Manacles, a group of notorious rocks a little over 1km offshore, Godrevy and Leggan Coves are surprisingly good beaches along a stretch of coast of variable beach quality. South of Godrevy Cove and Dean Point are two ‘Dean Quarry’ Coves.

TR12 6QR - From the B3293 in the centre of St.Keverne follow the road to the hamlet of Rosenithon. There is a limited amount of roadside parking but care needs to be taken not to obstruct the road. Access to all 3 beaches is from the Coast Path in a southerly direction and is about 500m to Godrevy Cove across fields: it is not a difficult walk. Leggan Cove can only be reached when the tide permits across the foreshore from Godrevy. Dean Quarry Coves are a further 500m south along the Coast Path right next to major quarry workings.

Godrevy Cove is over 300m in length and mostly sand and shingle but stony at the southern end. Even at high water there is an impressive area of beach backed by shingle banks that have vegetated. Leggan Cove is similar but much smaller and more sheltered. Dean Quarry Coves are very different: the first small rocky cove nearer the Point t has no beach at high water and a small shingle/sandy beach at low water. The most southerly cove is a more striking sandy beach with a derelict jetty on its northern side. Both the Coves are dominated by the disused quarry.

There is no safety equipment or lifeguards. Godrevy and Leggan Coves shelve but are good for swimming when favourable conditions prevail. They are not surfing beaches but provide good conditions for snorkelling especially around Leggan Point and towards Manacle Point. The Manacles are one of the most popular diving locations in the UK because of the large number of high profile wrecks.All 3 beaches have rock pools at low water.

There are no restrictions on dogs and the nearest facilities are at St. Keverne.

Water quality is believed to be good. Godrevy and Leggan never get crowded and their easterly aspect often makes them ideally sheltered when other beaches on the Lizard are affected by strong winds and high seas.