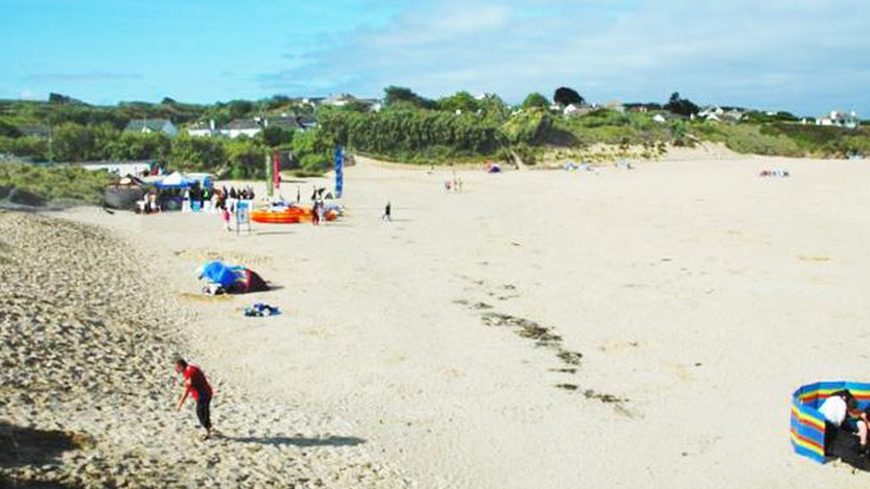 A wonderful crescent shaped collection of sandy beaches known as Harlyn Bay that consists of the main northerly facing Harlyn Beach and a number of small coves that are joined at low water (except for Big Guns Cove) all of which have their own identity and gradually round the bay a more sheltered easterly aspect and hence take on a different character. The Bay is very popular in summer largely because there are numerous caravan and camp sites and holiday complexes in the area. It is very accessible, good for families and has some fine surf. Much of the central part of the Bay is backed by low sand dunes which becomes rockier westwards around the Bay.

PL28 8SB - Harlyn Bay is signposted on the B3276 coast road from Padstow to Newquay, some 2.5kms from Padstow and also at St. Merryn where it is slightly under 2kms from the crossroads. The car park (capacity 300+cars) is situated right next to the beach with an overflow car park (capacity 400+ cars) on the landward side of the road. They are the only convenient car parks for the whole Bay; there are parking restrictions on the approach roads.

Harlyn Beach is right next to the car park with a flat and very easy access on to the beach. Bloodhound Cove involves a 500m walk along the Coast Path which runs along the beach for a short way. The smaller Greenclose Cove is a further 200m along the beach; access to both the coves can be cut off at high water. Access to Onjohn Cove involves taking the Coast Path above the other two coves and is some 950m from the car parks. There is a track down to the southerly part of Onjohn Cove (also known locally as Boat Cove) and a slipway to the northerly part also known as Cellars Cove. Big Guns Cove is a further 300m along the Coast Path and involves a scramble down a very narrow and steep path to the beach.

Harlyn Beach is over 300m wide with a sizeable area of sand at high water mark on average. At low water the tide retreats over 400m. It is sandy for most of the summer but in winter there can be areas of coarse sand and shingle. The stream that crosses the beach can divide it but its course changes on a regular basis and in summer the build up of sand can be such that the stream virtually disappears. To the west of Harlyn Beach where sand dunes give way to rocks is Bloodhound Cove; although to many it is an integral part of the main beach, it is more sheltered and a little less crowded in summer with a small strip of sand above high water. Greenclose Cove is even more secluded and sheltered but the area of sand above high water is small and on a rising tide the retreat back to the main beach needs careful timing. Onjohn Cove normally has an area of sand above high water mark on the southerly part of the Cove whereas the northerly part is often limited. With its easterly aspect it is usually very sheltered and loses most of the swell and surf that is found on the main beach. It is a delightful little cove but can get quite crowded. Big Guns Cove is very different; it is small and surrounded by cliffs, and, due to cliff falls the area of sand is quite limited; there is no beach at high water.

There is safety equipment above Harlyn Beach but none of the others. RNLI Lifeguards are on duty from Easter week right through to the end of September on Harlyn Beach where they operate from a small lookout. Bloodhound Cove is close enough to the designated bathing area to be able to use it whereas the other coves are not.

At Harlyn Beach and Bloodhound Cove it is necessary to only swim in the designated bathing area due to unpredictable currents at low water. In settled and calm conditions swimming on a rising high tide can be relatively safe if care is taken. The westerly coves that are in the lea of Cataclews Point and less affected by the swell and surf swimming can be undertaken on a rising tide reasonably safely but it is not advisable to swim at low water.

Harlyn is a popular surfing beach but is more sheltered than beaches on the westerly side of Trevose Head and comes into its own when stormy conditions make it unsuitable elsewhere. The easterly more exposed side of the beach is best but high tide rocks and rip currents can make it fairly challenging. It is good for beginners; there is surfing tuition from the beach during the summer and there is board hire and wetsuit hire from Harlyn Beach.

Snorkelling from Onjohn and Big Guns Cove can be excellent but not elsewhere. There are rock pools all around the rocky extremities to the Bay.

Dogs are permitted at all the beaches.

There are toilets in the overflow car park on the landward side of the road at the back of Harlyn Beach. There are no toilets for the westerly coves.

There is a kiosk cafe in the car park and shop on the Harlyn Beach in summer; the pub and restaurant are on the road close to the main beach. There is a better range of facilities at St.Merryn.

Water quality is generally good but the quality of the stream can be variable although generally fine. The beach is cleaned regularly in summer.

The Bay provides a range of locations within it to suit the weather and sea conditions and individual taste and requirements and is quite unique in this respect. The remains of an Iron Age burial mound are located in the dunes behind the beach. The beach is part public and part privately owned.