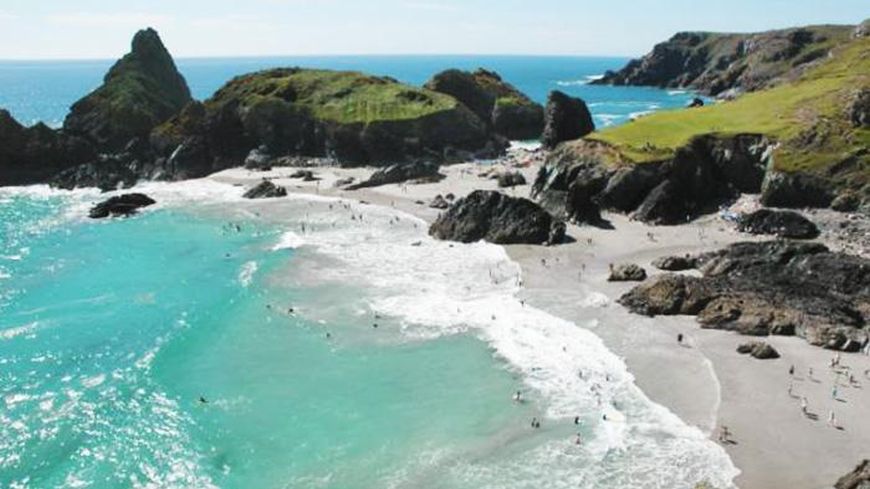 For many people this stunning, idyllic, white sandy cove represents the jewel in the crown of the Cornish Coastline. Its popularity began in Victorian times and the picturesque serpentine rocky outcrops known as Asparagus Island, Gull Rock and ‘The Bishop’ have adorned calendars and holiday brochures for over 100 years. It is owned and managed by the National Trust who pioneered the first successful visitor access management scheme in Cornwall to overcome the threats of wear and tear to the fragile and botanically important vegetation on the cliffs down to the beach from the car park.

TR12 7PJ - 750m south of Lizard village on the A3083 from Helston, the private road to Kynance Cove is clearly signposted. After 900m the road leads to a large (capacity over 260 cars) well managed car park, which, despite its size, is often full at peak times in summer. There is no parking along the access road but there are a few hard standing spots off the track, notably along an un-surfaced track at Holestraw about 600m before the official car park. Before setting out to visit Kynance it is advisable to check high water times as there is little or no sand at high water and a longer walk will be required to get on to the beach.

The path from the car park is about 400m in length, and includes a number of flights of steps, and as a result, is not easy for the less mobile and those with pushchairs. The National Trust operates a 2 way system which involves part of the path, on the return from the beach, taking a different route back to the car park. At high tide, access on to the remaining beach is not possible from this path but an alternative track from a point at the far north east end of the car park that leads to the cafe in the Cove can be used, but involves a considerably longer walk of 950m. On the way down to the beach there is a path to a viewing spot on the cliffs overlooking the Cove which is recommended, especially if a photograph is required.

With the fine sandy beach covered at high tide, the Cove takes on an entirely different character as all that remains is a strip of stones. However, the stones are a mixture of rounded green and red serpentine which makes this part of the Lizard so special. At low water a dual aspect beach emerges with part of it (the cove area) facing due south (which is unique along this coastline) and a smaller area around the headland called The Steeple (and also Sugarloaf Rock and Asparagus Island) which faces west. The Cove can therefore be very sheltered and secluded and especially pleasant when the dark serpentine absorbs and radiates heat from the sun. The beach is quite deceptive as it is considerably larger than it looks. There are a number of caves of interest, notably two named ‘The Parlour’ and ‘The Drawing Room’. When the tide rises, the diminishing area of sand can get very crowded. Opposite Sugarloaf Rock is a natural pool which is popular for diving off the surrounding ledges. There are two streams which flow down the two valleys to the cove and across the beach.

There is safety equipment on the path above beach but there is no Lifeguard Service. There are warning signs about beach safety. Swimming can be relatively safe on a rising tide and at high water but even in relatively benign conditions it is not advisable on an ebbing tide at low water due to currents that can be strong at times.

Surfing can be relatively good for beginners and those more experienced when there is a good swell coming in from the South West and the wind is from a northerly quarter. It is a beach break and is best at low to mid and on a rising tide. It is popular in summer by body-boarders but extreme care needs to be taken at low water.

Occasionally when conditions are calm, snorkelling can be undertaken at high tide which can be interesting around the rocks and islands but even then needs to be undertaken with care.

There are a few rock pools but they are not a key feature of the beach.

Dogs are permitted in winter but not allowed from Easter until October.

There are toilets in the car park which are closed in winter. There are also toilets by the cafe which are open all year and have baby changing facilities.

There is a cafe which is open from Easter until October which has been doing business since 1929 and has been recently refurbished by the Trust to make it an environmentally friendly and award winning facility; it also has a shop selling all the standard beach goods. There are shops, restaurants and a pub at Lizard village 1.2kms from the car park

Water quality is believed to be good but there is no testing in the vicinity. The beach is cleaned by the tide.
It is an outstanding family beach in the memorable setting of the Lizard National Nature Reserve. On the cliffs to the North West of the Cove known as The Rill, it is folklore that it was the place that the Spanish Armada was first sighted.