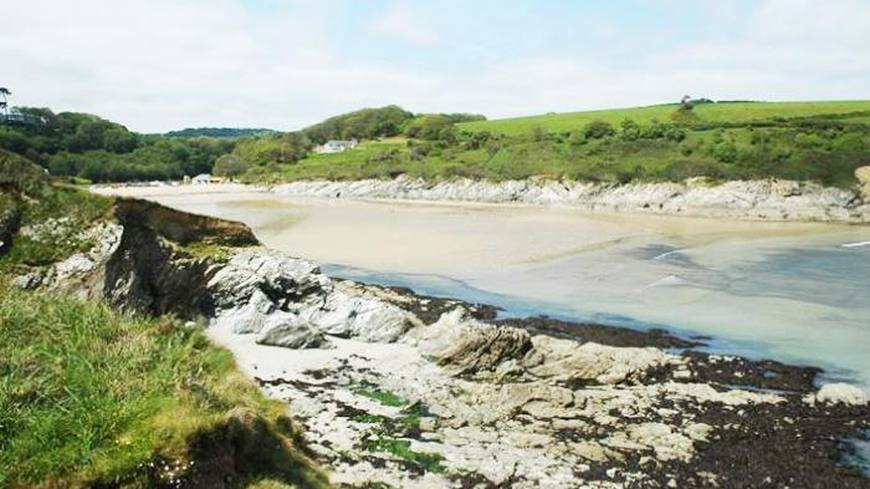 Maenporth is a popular sandy beach close to Falmouth and is easily accessible. It faces east and is very sheltered from prevailing winds. Its aspect means that for much of the year it is unaffected by the Atlantic swell and can be suitable for launching sailing dinghies, kayaks and small craft from the beach. It is an inlet with a coastal road running at the back of the beach which separates it from an interesting tidal estuary which runs north from the beach parallel to the road from Falmouth and supports much wildlife including Herons and Egrets. It is an attractive, relatively short (1km) walk from the village of Mawnan Smith along the footpath that runs down the westerly facing valley to the beach. There is an equally good walk along the Coast Path northwards to Sunny Cove (1.4kms) and further on Swanpool Beach (2.5kms). After a short walk southwards along the Coast Path there are two small sandy beaches below High Cliff with difficult access. Whilst Maenporth is a well used beach and a favourite with families, the High Cliff Beaches are little known, relatively small, hardly used and completely different in character.

TR11 5HN - From the Hillhead Junction on the A39 at the entrance to Falmouth, take the road signposted to Maenporth (5kms). The access road to the beach is narrow in places. The car park (capacity 160+ cars) is on the beach next to the road although it is small in relation to the popularity of the beach and can be full early in the day at weekends in summer. There are parking restrictions along the road in summer. The car park serves the beaches below High Cliff as well as Maenporth itself.

Access on to Maenporth Beach is easy and straightforward and suitable for pushchairs and wheelchairs. By comparison the access to the High Cliff Beaches is far more difficult. Take the Coast Path at the southerly end of Maenporth Beach to the first headland (200m) where there is a narrow and steep path down to an unnamed, small, part sandy, part shingle rocky cove. It is then a scramble over the rocks to the first of two beaches beneath High Cliff. This is not possible at every low tide so real care has to be taken and it is not straightforward. To reach the second of the High Cliff Beaches (actually nearer to Bream Cove than Maenporth), continue southwards along the Coast Path from the headland at the southerly extremity of Maenporth for 480m and there is a very small and rather overgrown path that winds down the cliff to the rocks at the northerly end of the beach but again involves a scramble over rocks that has a fair degree of difficulty and is also tide dependent. There are in fact two access paths up the cliffs from this beach one of which is private and the
other certainly seems to be private although it does not say so and leads up the cliff to the Coast Path, approximately 760m from Maenporth Car Park (and some 800m from the parking for Beam Cove).

Maenporth is a wonderfully flat sandy beach that is over 250m wide at high water mark and stretches over 300m down to low water mark. There is always a strip of dry sand above high water mark. There are great views out across Falmouth Bay. The stream that comes down the valley enters the beach half way down on the northerly side by the rocks. The most northerly of the High Cliff Beaches has a wide strip of sand that gives way to rocky ledges at low water. There are four caves of note. The southerly of the High Cliff Beaches is similar.

There is safety equipment at Maenporth but not at the High Cliff Beaches. Maenporth is a relatively safe beach for swimming at all stages of the tide. There are no Lifeguard Services.

It is not a recognised surfing beach but on occasions it can be good for bodyboarding and also an attraction for younger surfers especially in autumn and winter. It is well used as a launching spot for kayaks and sailing dinghies. It can be a good beach for windsurfing at the entrance to the inlet and further out into the bay where the wind is more constant.

It is a popular beach to go scuba diving and there is some excellent snorkelling either side of the mouth of the inlet. There are some fine rock pools on the southern side of the inlet at low water.

Dogs are allowed in winter but there are restrictions from Easter Day until October.

There are toilets and a cafe next to the beach and a restaurant and bar opposite the road. The nearby village of Mawnan Smith has a pub and village shop.

Sea water quality is generally good: the stream crossing the beach at low water can be variable. The beach can be plagued by quantities of seaweed.

Care needs to be taken using inflatables; when the wind is offshore it is advisable that they are not used and if they are, only with extreme care. There is a good cliff walk southwards to Bream Cove along High Cliff. In 1978 the trawler Ben Asdale was wrecked off the northern side of the beach and the remains are visible at low tide.