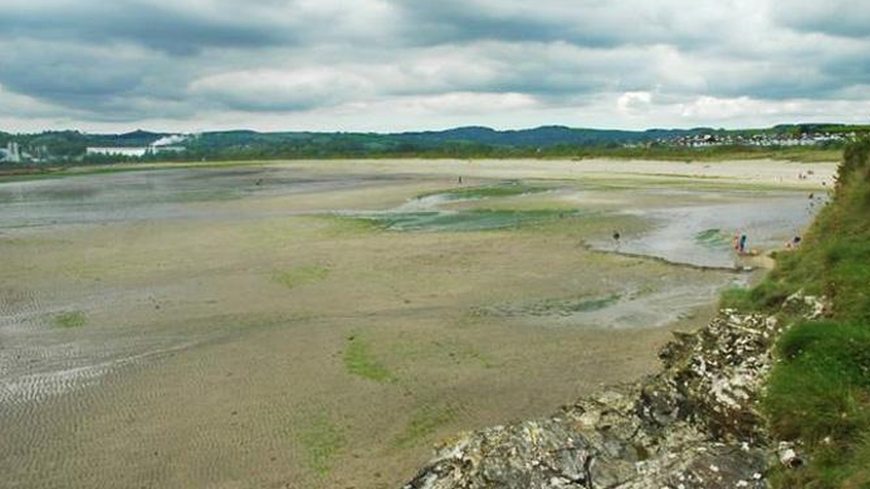 A south facing expanse of sand that could have been the jewel in the Cornish Riviera but as a result of centuries of mineral extraction above St.Austell is now a flat beach of fine silt with a backdrop of the adjacent Par Docks and China Clay Works. However, backed by a sand dune system it has some qualities including part of the dunes being a Local nature Reserve; it is Council owned and never gets overcrowded.

PL24 2AR - On the A3082 from St.Austell to Fowey just beyond Par is a former railway bridge and the small settlement of Polmear. Turn right by the pub along a road to a caravan and holiday park; on the left is a large car park (capacity 350+cars) which involves a very short walk through the dunes to the beach. Alternatively continue along the road past the holiday park and after 300m and 900m there are smaller parking areas in the dunes. There is also a public footpath from the middle of Par (Par Green Road) under the old railway to the western part of the beach, a distance of 480m. It is a very accessible beach and although the paths through the dunes are on soft sand are generally good for most pushchairs.

It is a very large beach with the strip of fine white sand above high water mark that stretches from the mouth of the Par River, next to Par Docks in the west to the low cliffs at Polmear (some 900m). The easterly side of the beach with the low cliffs and stream that crosses the beach is the most popular part of the beach and the most sheltered and secluded. At low water the tide recedes for over 800m, often to Killyvarder Rocks and beyond the breakwater which runs out to sea next to the Par River. The westerly parts of the beach can be muddy with the rest a fine silt often covered in seaweed.

There are rescue/safety points above the beach but no lifeguard services. Although the easterly side of the beach is safe for swimming it is best at high water otherwise an exceedingly long walk through shallow water is necessary. Although not a surfing beach it can be good for bodyboarding at times and is a favourite spot for windsurfers and kite surfers. It is not a snorkelling beach and there are few rock pools.

Dogs are allowed all year. There are toilets in the dunes some 200m west of the main car park. There is a pub at Polmear, a beach cafe at the back of the dunes and shops in Par itself. The beach is cleaned in summer. Sea water quality is variable due outfalls from the China Clay Works which can make the sea seem cloudy. The quality of the Par River and stream are also variable. It is a good beach for young families.