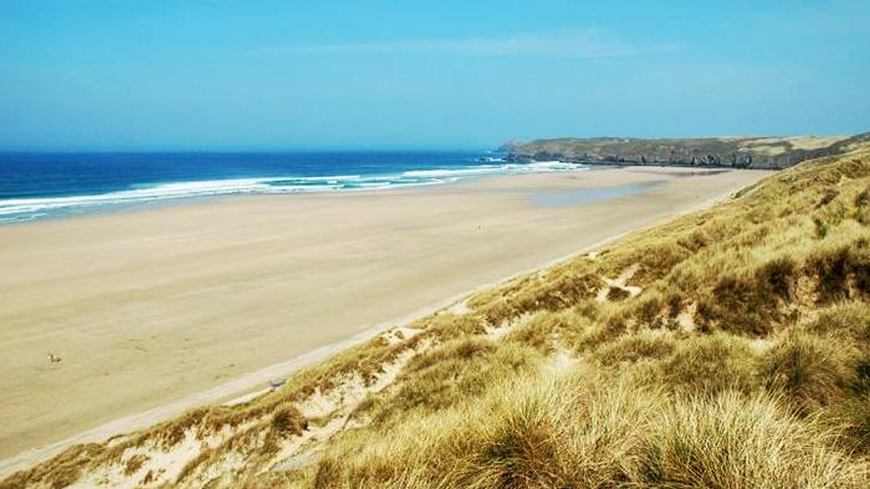 This north westerly facing beach is over 3kms long and one of the most impressive beaches in Cornwall stretching from Droskyn Point in the south to Ligger Point in the north. The most accessible part of the beach from Droskyn Point to Cotty’s Point is next to the holiday resort of Perranporth and backed by Reen Sands, a large sand dune system. The less accessible length of beach north of Cotty’s Point is backed by Gear Sands (with its large Holiday Park) and Penhale Sands, a large part of which is a military training area. The beach is known locally as ‘Perran’ or Perran Sands. In Cornish it is called ‘Porthpyran’ (St.Piran’s Cove) being named after St. Piran the patron Saint of Cornwall. It is thought that St.Piran founded an early Christian Church in what is now Penhale Sands but for centuries was buried under the shifting sands. It was unearthed in the 20th Century. The part of the beach adjacent to the resort is owned by the local Parish Council. The remote northerly end of the sands is a recognised Naturalist beach.

TR6 OJL - From the A3075 road from Chiverton Cross to Newquay, the B3284 leads to Perranporth. Alternatively, from the A3075 at Goonhavern take the B3285. There is a car park (capacity 220 cars) next to the beach at Beach Road. There is a direct access on to the beach which is suitable for pushchairs and wheelchairs. There is a larger car park (capacity over 300 cars) – TR6 0DR - at the top of Cliff
Road where there is also a limited amount of roadside parking. Access on to the beach is down a flight of steps on to the beach. To get to the more northerly part of the beach beyond Cotty’s Point, which is cut off from the rest of the beach at high water, it is best to go to Perran Sands Holiday Park - TR6 0AE - which can be reached by taking the B3285 road from Perranporth to Goonhavern and at the top of Budnic Hill, 1.2kms from the centre of Perranporth, turn into the entrance to the Holiday Park and go through the complex to a small parking area (capacity 30+ cars) in the dunes. There are various paths through the sand dunes to the beach.

At high water there is a large area of sand above high water mark from Beach Road to Cotty’s Point containing facilities and the Life Saving Club. Beyond Cotty’s Point there is a strip of sand some 2kms in length. When the tide is out a large expanse of wonderful flat sand is exposed which is only broken by two streams that flows across the beach at the Droskyn end; it is this part of the beach which is the most popular, in part due to its accessibility. Whilst sand dunes back the beach for most of its length, at Droskyn there are cliffs and a number of natural arches beyond which there is a more remote area of beach. It is a fairly exposed beach with shelter hard to find. It is a popular beach in summer.

There are notorious rip currents especially at low water and swimming is only advisable in the lifeguard patrolled area. It is a popular surfing beach which can get crowded. The classic beach break is good for beginners and also those more experienced who tend to gravitate towards the far south of the beach where there are often sizeable well formed waves and some protection from the prevailing westerly winds. There is a surf school and also a Life Saving Club that was formed in the 1950’s because of a spate of accidents and drowning, as tourism in the area grew and the beach became popular. It is a well known beach for Sand Yachting and Kite Buggies in winter when there are no restrictions. Kite Surfing also takes place outside the designated bathing areas.

It is not a snorkelling beach but there are a few sandy pools at the southerly end of the beach.

Dogs are permitted but must be kept on a lead during July and August. There are toilets adjacent to the two main car parks and also behind the pub on the beach. There are cafes, beach shop and pub on the beach with a range of facilities in the resort close by.

Sea water quality is good but the streams can be variable especially after heavy rain. The well used area of beach below Reen Sands is cleaned regularly in summer. With its easy access the beach is a haven for those into extreme sports but it is also a glorious family beach with all the facilities close at hand.