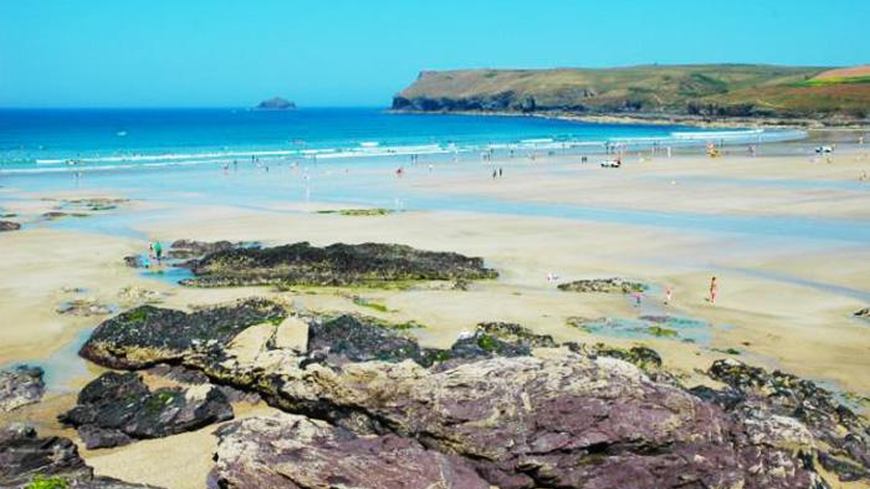 These are fine westerly facing beaches with an expanse of sand at low water that is sometimes known as Hayle Bay (which includes Pentireglaze Haven to the north). Although it is at the mouth of the Camel Estuary it takes the full force of the Atlantic swell and has become a haven for surfers. Polzeath, and New Polzeath were developed as resorts with considerable holiday type development during the latter part of the twentieth century and as a result lack the history and character of many Cornish coastal settlements. However, it is one of five voluntary Marine Conservation Areas around Cornwall and was awarded the coveted Blue Flag award in 2010. Polzeath is ‘Pollsygh’ in Cornish. Cockett Haven is a popular small cove below New Polzeath and Trestram Cove is at the southerly extremity of the main beach.

PL22 6TB - From the A39 at Wadebridge take the B3314 and after 7kms at the ‘T’ junction take the road to Polzeath; after 550m turn left at the cross roads and continue for 1km then take the left hand fork and the centre of Polzeath is 2kms. When tides permit there is a car park on the beach (capacity about 150 cars) which is accessible from the main road next to the beach. The main car park (capacity over 900+ cars) is signposted and is from an access road 70m up the hill on the right with commanding views across the Bay. It is a short walk of 250m along and down the cliff to the beach and easily accessible for the less mobile. An alternative is to go to New Polzeath on approaching Polzeath where there is a car park (capacity 130 cars). There is a short walk down Bishop’s Hill Road and along Atlantic Terrace for the path down to Cockett Haven and the rest of Polzeath Beach. There is also roadside parking along Atlantic Terrace (about 60 cars); there are parking restrictions on other roads.

At low water the beach stretches all the way from Trestram Cove in the south past Slipper Point and Pentireglaze Haven and Pentire Haven to the north, a distance of over 600m whilst it has a depth of over 500m from the road. It is mostly fine golden sand but there can be patches of coarser sand and shingle depending on the time of year. There is usually a fairly sizeable area of beach above high water mark in summer but at spring tides and in winter it can be small or non-existent. Car parking takes up a part of the beach in summer which is somewhat unfortunate. Despite its size it can get very crowded when the tide is in and can be very exposed, especially on the New Polzeath side of the beach. There are rocky areas either side of the beach which are important geologically with unusual bands with a strong purple hue. Cockett Haven (below New Polzeath) faces south and can be sheltered from northerly winds and gets cut off from the rest of the beach as the tide rises. Trestram Cove is always quiet, secluded and sheltered from the prevailing westerly winds but is easily cut off from the main beach as the tide comes in.

There are a number of safety equipment points above the beach. RNLI Lifeguards are on duty from the end of April until the end of September and also Easter week and the weekends of the October half-term.

It is not really a swimming beach because of the usual swell and surf but when conditions do prevail should only be attempted when the Lifeguards are on duty and then in the designated areas because of notorious currents especially at low water. In very calm conditions at high tide in summer swimming can be considered but only with care.

It is a popular and well known surfing beach for beginners and the more experienced. It is a typical beach break on flat sand with fairly consistent waves which are sometimes described as ‘mellow’ but offshore banks on either side of the beach can produce challenging waves in a big swell. Its aspect can mean the surf gets messy but is good if the wind is from the south and east. There are regular surfing competitions and there are experienced surf schools for beginners operating close to the beach. There is a designated surfing area which can get particularly crowded at weekends when the surf is good.

It is not a snorkelling beach normally because of the swell and surf but in calm conditions at high tide it can be worthwhile especially around Slipper Point and Trestram Cove. The rocks exposed either side of Polzeath beach at low tide combine to form one of the most important inter-tidal areas in North Cornwall that is accessible to the public with numerous rock pools of interest and importance. As part of the Voluntary Marine Conservation Area it contains 10 species of seaweeds and a number of species of shellfish, crustaceans and molluscs which are recognised as being of special conservation importance including the unusual Celtic sea slug and the Polysiphonia seaweeds. These together with the many of other species help provide the area with a special identity.

Dogs are not permitted from Easter Day until the end of September.

The most easily accessible toilets are located on the opposite side of the road to the beach car park and include facilities for the disabled. There are also toilets adjacent to the New Polzeath Car Park. There are cafes, restaurants, beach shops pubs and an array of equipment hire including surf boards and wetsuits all immediately above the beach. There is beach wheelchair available for hire from one of the surf shops.

The sea water quality is generally good but the stream crossing the beach can be contaminated during times of heavy rain. The beach is cleaned daily by Cornwall Council. Polzeath was a favourite haunt of the late poet laureate, Sir John Betjeman and is celebrated in some of his verse. In 1991 the BBC made a film ‘Tresoddit’ that was filmed in and around Polzeath. The beach is jointly owned by the Cornwall Council, the National Trust and two private landowners. It is a short walk southwards to Broadagogue Cove.