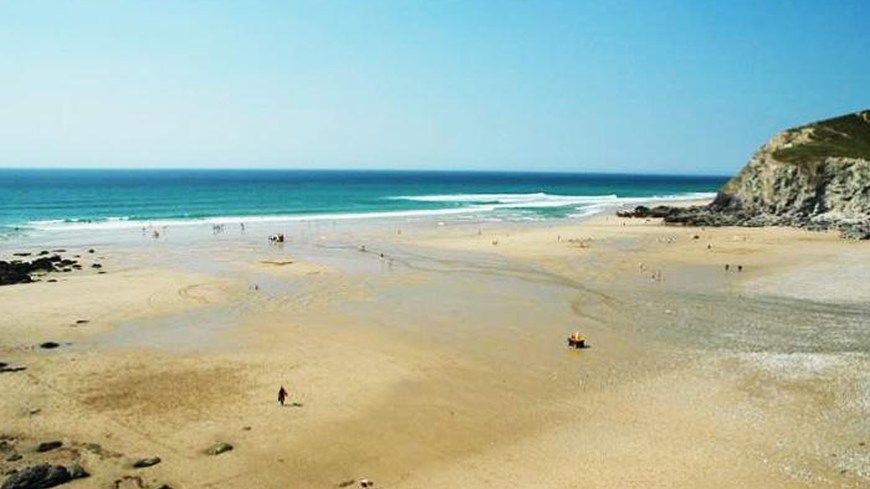 Porthtowan is a popular family friendly beach that has excellent surfing credentials. It owes much of its present character to its popularity in the early part of the 20th century when people from Redruth flocked to it, particularly at Bank Holidays. It is owned and managed by Cornwall Council and part of a stretch of coastline that was heavily mined for tin and copper. Former 19th Century mine buildings and mine shafts are everywhere and there are mine adits in the cliffs. It is part of the Cornish Mining World Heritage Site.

TR4 8UD - There are a number of roads that lead to Porthtowan from Redruth and Scorrier (on the A30), and also from St.Agnes all of which are signposted. There is a car park (capacity 140 cars) which is located some 50m from the beach. There has always been a certain amount of roadside parking along Beach Road but there are restrictions in force so it is advisable to check the signs. Parking on the western side of the beach is for the Lifeguards and members of the Lifesaving Club.

The beach is easily accessible from the car park and suitable for many of those with disabilities.

The beach at low water is extensive and runs from Lushington Cove and beyond the Tobban Horse rocks in the south-west, joining with Chapel Porth in the north-east, a length of over 3kms. It is mostly fine yellow sand but much of the beach at high water has areas of shingle (especially in winter) which leads to many people using the sand dunes, or what remains of them. Over-use of the fragile dune vegetation has lead to serious erosion of the marram grass making the whole beachhead somewhat unsightly. There is a bathing pool created out of the rocks on the point on the easterly side of the beach which is popular with children; it is however only usable at low water but is a great asset for the beach. To the right of the main entrance on to the beach the soft cliffs are badly eroded and rock falls on either side of the beach are something to watch out for. There is a stream that dissects the beach and an area of grass behind the dunes when shelter is required on windy days.

There is safety/rescue equipment. RNLI Lifeguards are on duty over Easter and from May until the end of September. There is a designated bathing area and many occasions a separate surfing area. The Porthtowan Surf Lifesaving Club is situated on the westerly side of the beach: it has over 100 members and supplements the RNLI activities.

The beach is well known for its rip currents especially near the bathing pool and opposite the Surf Lifesaving Club; therefore, unless the conditions are really calm and it is a rising high tide, swimming and bathing are potentially dangerous. However, they can be undertaken in the designated area and when the Lifeguards are on duty and it is permitted.

It is one of Cornwall’s many really good surfing beaches but has a reputation for overcrowding when conditions are good. The large winter swells attracts experienced surfers and in summer it is usually good for beginners. It is best at mid to low tide. There is a Surf School that is located on Beach Road about 150m from the beach for those wanting to learn. There are a number of places that hire boards, wet suits and other equipment.

It is not good for snorkelling and diving. At low tide there are rock pools around the points on either side of the beach but they are heavily scoured by the sea.

Dogs are not permitted from Easter Day until the beginning of October.

There are toilets located in the car park and these include facilities for the disabled.

There are cafes and shops between the car park and the beach and also further along the road. There is a well known and frequented bar right next to the entrance to the beach with great views overlooking the sea. There is also a pub with a good sized car park backing on to the grassy area.

It has been a Blue Flag beach since 2005.The beach is cleaned daily (and manually) from the week before Easter until October: litter bins are provided
.
The water quality has been generally good in recent years. Nevertheless, the quality of the water in the stream can vary according to local conditions such after heavy rainfall.

Sitting inside or outside the Bar, (or on the seats on the coast path leading to Chapel Porth) watching the sun go down over the horizon in summer is very special. Porth in old Cornish means ‘the narrow way between the hills’, or more popularly these days, ‘bay or cove’ and Towan means sand dunes: either way the name is very apt. There is a former ‘engine house’ that has been converted into a residential property of interest near the beach on the western side. In 1897 the wreck of the ‘Rose of Devon’ was a tragic event: bodies of dead sailors were buried in the cemetery at nearby Mount Hawke where a Cornish Cross marks the event.

It is very tempting to walk along the beach to Chapel Porth or Lushington Cove at low water but be careful of the tides as it comes in very quickly!