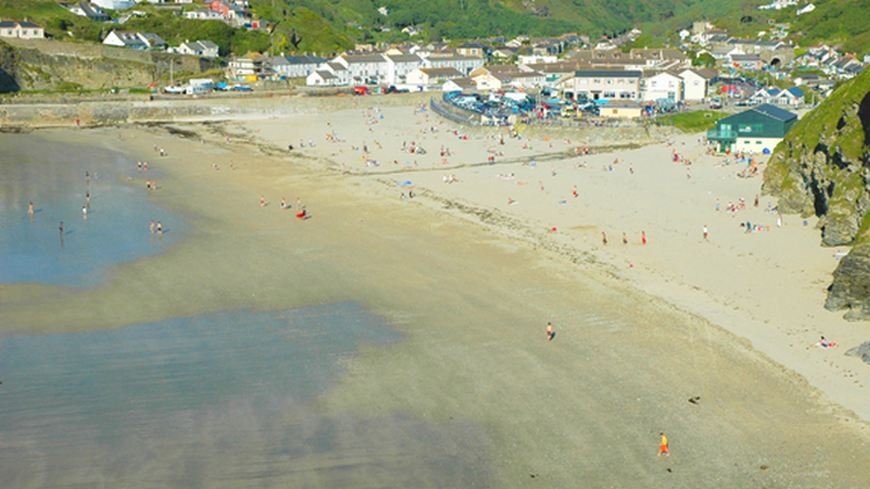 A popular family beach with both locals and visitors that is known for its surf and surfing. Very unusually for the north Cornish coast it has a small harbour adjacent to the beach that is a remnant from the days when it was an important part of the mining era with tin and copper going by boat to South Wales in return for coal that fuelled the local mining industry. In Cornish its name means ‘Sandy Cove’ or ‘Beach Cove’. To the west of the main beach (and separated at high water) is a small rather secluded part of the beach known as Smugglers Cove or Amy’s Cove.

Traditionally Portreath was the beach frequented by those in nearby Redruth and the surrounding mining villages. Although it faces north it can be relatively sheltered by the surrounding cliffs. Because it is where the valley containing the Portreath Stream meets the sea, it has an open feeling despite the adjacent high cliffs.

TR16 4PH - From the A30 at Redruth, take the B3300 signposted to Portreath, a distance of 5.5kms. Alternatively, the B3301 from the A30 at Hayle along the coast road with scenic views across the north coast is recommended. There is only one car park (capacity 160 cars) and it is right next to the beach. There is, however, a fair degree of roadside parking, without restrictions, within walking distance of the beach throughout the village. There is road access to Smugglers Cove -TR16 4NS - up Battery Hill from the B3301 close to the main beach but there are no parking facilities. There is an informal parking/picnic area at the top of Lighthouse hill – TR16 4LH - on the eastern side of the Harbour but is some 550m from the village centre.

From the car park there are steps directly down to the beach, or from the road, straight on to the sand, making it easily accessible for the less mobile. To get to Smugglers Cove at high water involves a walk up Battery Hill (300m).

A medium sized wonderful fine sandy beach that is so typical of the north Cornish coast. At high water there is a substantial area of dry sand, some 250m in length, with a small area at Smuggler’s Cove. At low water the beach is quite extensive with areas of rocks next to the harbour/breakwater wall on the eastern side of the beach. The stream crosses the middle of the beach.

There are a number of safety/rescue equipment points above the beach and the harbour and also at Smuggler’s Cove. RNLI Lifeguards are on duty from the last week in May until the end of September and operate a designated bathing area. The Portreath Life Saving Club has an impressive Clubhouse by the main entrance to the beach; it was formed in 1958 after a young boy was drowned the previous year and there was a valiant rescue attempt by a local person.

Swimming should only be undertaken when the lifeguards are on duty and then in the designated area due to notorious rip currents at low water on ebbing tides. Occasionally when there is little swell and surf it is possible to swim on a rising high tide but then only with care.
It is a popular surfing beach which can be relatively sheltered from westerly winds and offers a good beach break in the middle of the beach that is good for beginners. More experienced surfers like the surf next to the harbour wall which produces a right-hander which works best from mid to high tide. The often large barrelling shorebreak is favoured by bodyboarders.

It is not a snorkelling beach except in very clam conditions and then can be interesting especially around Western Hill Cliff to the inaccessibleWestern Cove but this must only be undertaken by experienced snorkelers who understand the local tides and conditions. There are interesting rock pools by the Harbour Breakwater wall and also at the westerly end of the beach.

Dogs are not permitted from Easter Day until the beginning of October 7.00hrs to 19.00hrs but allowed during the winter months.

There are toilets some 80m from the beach on the main road. There are a number of cafes, restaurants shops and pubs close to the beach and the car park.

The slipway at the end of the harbour can be used to launch small craft but with approval of the Portreath Harbour Association; it must be remembered that going out beyond the breakwater can be highly dangerous because of the usual heavy swell. The beach is cleaned daily during the summer. The water quality is generally very good although the stream can be variable. There is a novelty golf course by the Harbour and a small area of beach within the Harbour that slopes down next to the Breakwater. The Harbour is part of the Cornish Mining World Heritage Site and has information boards outlining its fascinating history. There is a cycle trail utilizing the former Portreath Tramroad which starts opposite the school and goes to Devoran on the south Coast and is known as the ‘Coast-to-Coast’ Trail.