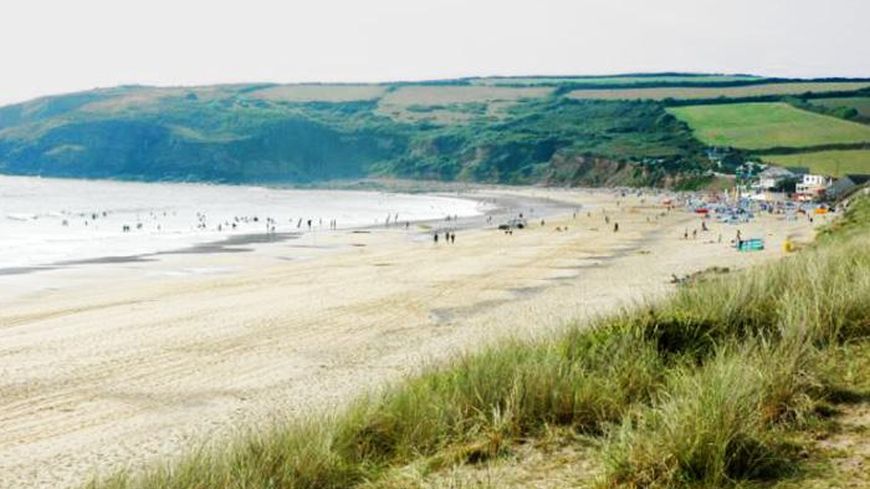 This is a popular south westerly facing sandy beach that has much to offer including a fine stretch of sand at all stages of the tide. It is very accessible. The northerly end of the beach is historically known as Sidney Cove whilst the southerly end is regarded as a separate beach known as Hendra. Praa Sands means ‘Poll Wragh’ in Cornish and means Hag’s Cove or Witches Cove. Pengersick Castle which is located a short distance above the beach is supposed to be one of the most haunted buildings in the UK and is the venue for regular ghost-hunting activities. The north-western side of the Beach contains the Folly Rocks Site of Special Scientific Interest, noted for its geological aspects, including granite porphyry. The Beach is within the Cornwall Area of Outstanding Natural Beauty and is one of the few places in Cornwall to have a Village Green (which is immediately above the main section of the Beach).

TR20 9TQ - Signposted from the A394 midway between Marazion and Helston it can be reached by two different access roads (both a distance of about 1.5km) which link up behind the sand dunes above the beach. There are four separate car parking areas (capacity in total of over 320 cars) close together and adjacent to the cafes, shops and bar immediately next to the main access points to the beach. The largest parking area next to the sand dunes operates an overflow parking area in summer. There is a small parking area – TR20 9TB -for about 8 cars at the Pengersick end to the beach. Roadside parking is restricted in the summer months.

There are two pedestrian access points next to the main parking areas – one involves a short flight of steps and the other a slipway which is suitable for pushchairs but may be too steep for the less mobile. There two other access points involving a short walk (150m) along paths across the dunes from the Pengersick end parking area, both of which involve a short flight of steps. The middle section of beach involves walking along the sand from either the Pengersick access point or from the far end at Hendra.

The extent of the dry sand above high water (approx 350m in length) and the amount of fine yellow sand at low water (approx 1.5km in length) make it ideal for families and young children. Because of the fragile nature of the sand dunes it is necessary to avoid walking or using them although the grassy Village Green behind the dunes known as ‘The Green’ is ideal as an alternative to the beach itself. In winter the extent of the beach above high water can be reduced as beach levels are affected by storms and heavy seas. The part of the beach next to the main parking areas can get fairly busy in the height of summer but the numbers thin out quickly towards the middle section.

There are RNLI Lifeguards on duty from early May until late September and are located at facilities above the most popular part of the beach near the largest car park. There is a designated area for general water use and at peak times a separate designated area for surfing and entry for those participating in other extreme sports. There is permanent rescue/safety equipment at the main access points.

It is not a swimming beach due to rip currents, especially at low water but usually on a rising high tide it is relatively safe when the swell and surf permit. In summer swimming should only be undertaken in the designated area operated by the lifeguards; this means that there is a lengthy stretch of beach going all the way down to Hendra that is outside the Lifeguard designated area although the Lifeguards do patrol the whole beach as much as possible.

Apart from the North Coast, Praa Sands offers some of the best waves in Cornwall due to its south-westerly aspect. It often provides a really heavy, ‘barelly’ wave especially near high tide which breaks close to the beach. It is a good for both beginners and those more experienced. It can get very busy in the height of the summer season where the designated area comes into its own. It is also good for bodyboarders. The best surf tends to be the section of beach opposite the main access points. It is also a good beach for surf kayaking. There is a full array of equipment hire including surfboards and ‘sit-on’ kayaks. The best place for snorkelling is at the northernmost extremity of the beach out to Hoe Point and beyond Lazy Bank Island with its natural arches when conditions are suitable. The only rock pools are also to be found at beneath the cliffs leading to Hoe Point. Kite Surfing and the use of inflatables is not permitted.

Dogs are not permitted from Easter Day until the beginning of October from 7.00hrs to 19.00hrs.

Toilets are located just above the main slipway access. There is a disabled toilet and the key to it is held at the adjacent restaurant. There is a beach shop, cafe, restaurant and pub immediately above the beach.

The slipway is somewhat narrow but can be used to launch small dinghies and other craft from trailers. The beach is cleaned regularly from April to October; this includes the dunes and ‘Green’. The sea water quality is very good but the stream that crosses the beach at the main access point can be variable.

It is a fine family beach although it can lack a degree of shelter. There is a nearby golf course. The low cliffs at the southerly end of the beach are under constant erosion. The dunes and Green are made up of calcium rich shells which give rise to many rare floral species. The beach is largely owned by Cornwall Council.